did you know that a bunch of bananas is actually called a ‘hand’, with each banana being a ‘finger’

You know how you suddenly become obsessed with a certain food and, for no discernible reason, go from eating it once a year to Every. Single. Day?!

Well that’s how it’s going down between me and bananas at the moment.

Since I’m not preggers, there can only be some nutritional deficiency behind these banana cravings….but which to pick?

Bananas are a great source of many things from potassium to vitamin B6. 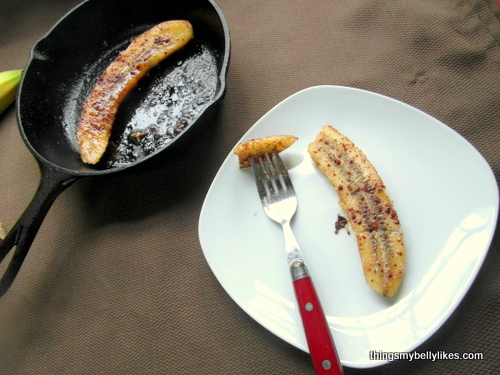 serve with plain yoghurt if you do dairy

And they also taste amazing, so there’s that. One of my favourite go-to snacks at the moment is sliced frozen banana pieces sprinkled with cinnamon.

They taste a bit like ice-cream (if you haven”t had ice cream in a while).

Cooking bananas is not normally on my radar but these were a pleasant surprise. With a slight dusting of sugar and spices, the humble fruit is transformed into the perfect breakfast/dessert/anytime snack.